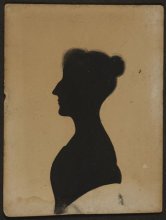 As a member of the University of Manchester, SRi Forensics' owner Ray Evans continues to contribute the the research of the institution, but also to contribute to the history of Manchester..
See and hear how a mystery from the 18th Century was solved using modern day methods..

The long-held identity mystery surrounding a silhouette always thought to be of Elizabeth Gaskell has been solved at The University of Manchester.

Medical artist Ray Evans and Stella Halkyard, who curates the University of Manchester Library’s collection of paintings, joined forces to authenticate the silhouette that is believed to be of the Victorian novelist.

Using state of the art facial measuring software and more traditional provenance research, the team now admits that whilst they can never confirm its authenticity irrefutably, they say it is very likely to be of Gaskell.

Ms Halkyard said: “The silhouette has an excellent 'provenance' and a 'chain of unbroken custody’ which means that it has been kept by Gaskell's descendants and we know where it has come from and where it has been throughout its history.”

She added: “At The John Rylands Library we have a miniature portrait that is accepted as a likeness of Gaskell. It was made during her life time by her step uncle who was a very skilled portraitist and a comparison between the two images shows strong similarities.”

Mr Evans analysed the two silhouette images using scientific facial comparison methods and found that the facial proportions and morphology of the face of the person represented were virtually identical.

He says his results were “consistent across the two images” and that “putting all this evidence together makes it likely that the two images portray the same person and that person is very likely to be Elizabeth Gaskell.”

To coincide with the 150th anniversary of Elizabeth Gaskell’s death (12 November 1865), the silhouette is being brought to The John Rylands Library on Thursday 12 November by its owner Sarah Prince who is a descendant of the Gaskell family.

Images of both silhouettes are being made available via the world’s largest online collection of Elizabeth Gaskell works. The collection was digitised earlier this year by the University’s Library which used cutting edge technology to digitise selected works from their internationally renowned Gaskell collection.
The original silhouette is owned by Sarah Prince, a descendant of the Gaskell family.
Media enquiries to:
Kath Paddison
Media Relations Officer
The University of Manchester
email: kath.paddison@manchester.ac.uk